From starting GMEC in February 2011, in Unit 2, Merrylee's, fixing, servicing and selling lawnmowers as a sideline whilst waiting for the motorcycle side of things to take off, GMEC very quickly became a busy place. Later that same year we became Lexmoto and Pulse dealers filling the showroom with 50cc and 125cc learner legal motorcycles and scooters, before adding Boatian, Zontes and Quadzilla products!

We soon needed more space and was offered the opportunity to take on another unit, Unit 3 - known as the workshop. The workshop quickly took off, we borrowed to fund the required  MOT bay, which was installed in 2012.

And so the following year we needed yet more space! -  that's when we took on Unit 10 - the bargain basement as it became known!! There was always something for someone looking for a bargain project, customers would come to us and ask whats in the "bargain basement"  Graham from Scarborough Rider Training started operating from GMEC in 2014, we were, yet again, running out of room, therefore taking on Unit 8, primarily for Graham to store his training bikes.

In 2015 we opened the GMEC cafe, Known now as "Route 64". After spending many long long hours growing, both the cafe and the motorcycle side of the business, it became clear we were very quickly starting to out grow the Merrylee's site. We needed to do something and fast, otherwise we would find ourselves having to close GMEC's doors.

In October 2017, Mark became ill due to stress and ended up in hospital, it was then when he started to think about things and realised the only way for GMEC to survive was to relocate to a more suitable premises - Thats when we started to search! Looking everywhere for suitable premises and locations and were struggling to find anywhere - until, we thought ..... maybe we could do something with a pub!! Weirdly, the one we have now was not an option at the time as it was for sale - no way would we be able to purchase a pub - so we thought.

The Hare and Hounds in Staxton came up on the market To Let, "Lets go have a look". So in November 2017 we went to view the old pub in Staxton. It was perfect, the shop would have to shrink, no showroom and no workshop but there was room for the MOT bay and the Cafe. Plus we could live in above. But..... There was far too much work needed for us to even consider leasing the pub. No chance!! Two days later, after constantly thinking and talking about it, Mark still ill and not long out of hospital, staff members being brilliant and rallying round to help in any way they could, desperately trying to keep GMEC alive!...."Call the bank" As the saying goes, - "if you don't ask, you dont get". We did get it!! - Eventually!

We had a tough few months ahead of us, having to get permission for change of use, working with the parish council, solicitors, the owners of the building at the time, it was endless - courses, exams, tests,  etc etc, deadlines to meet, GMEC still to run, a family to see to. It was a very difficult time, as many of you know.

However, Monday 12th March GMEC purchased the "Hare and Hounds" and on Tuesday 13th March GMEC were in! Mark had a deadline .... He wanted to be in and have GMEC operational for Good Friday! A challenge it certainly was, with the help of some extremly good friends, staff and customers, we did it!! We opened on Good Friday. We would like to personally thank the following people: Rich and Paul from Centurion windows, John and Chrissie Hutchinson, Andy Welbourn, Doug & Celia (from the village) and the man thats always on it - Mick Holmes and his lovely wife Sarah! These people made the impossible possible, and sometimes words just don't cut it!!

The following week, we suffered a major set back and had to close -  the ceilings had caved in upstairs., and filled the premises with debris!

However, we were soon open again the following week - again, thanks to our amazing team of hard workers, we cleared up the mess and replaced the ceilings, working virtually around the clock!

GMEC will now be a working progress for some time, but, it will all be for the better!

We have now moved in, The MOT bay is now here, GMEC, Route 64 is once again thriving!

The Bike Nights are ever popular, the shop has lots of new new gear and brands and doing great, plus we have a new mechanic in the workshop, with Mark overlooking the jobs taken in. Have a browse through the pictures of how we were, the move and now! 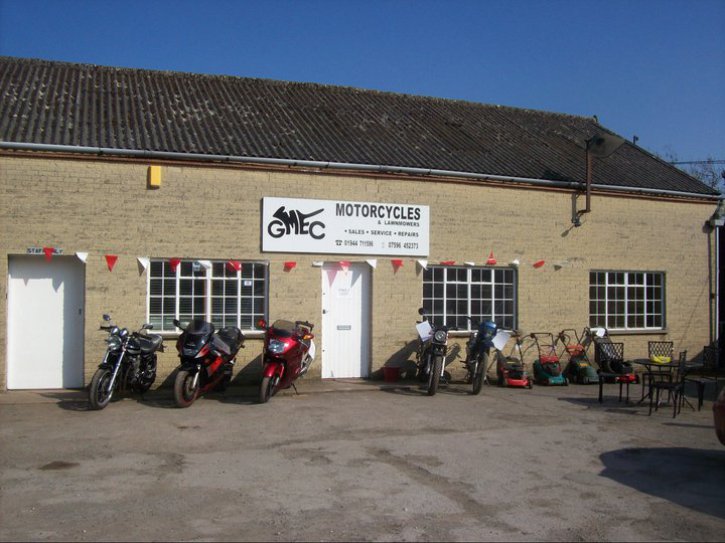 How the showroom began. 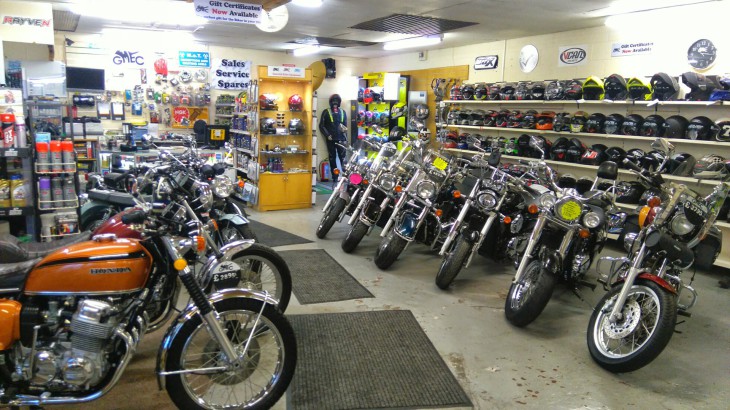 Our then well stocked showroom - something we became well known for! 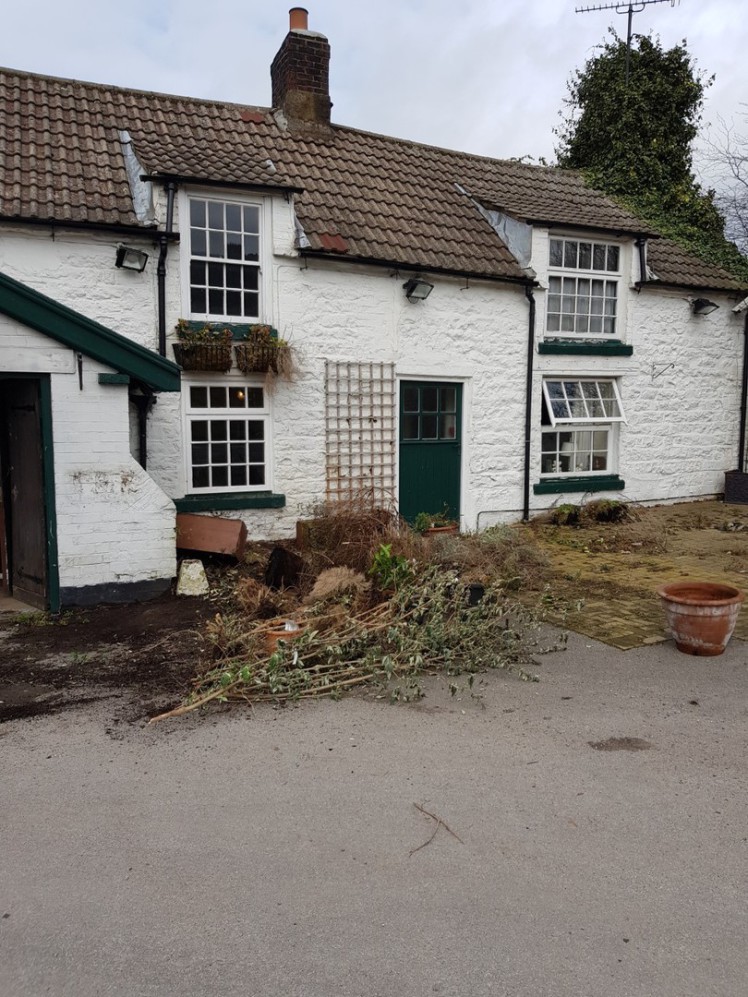 Above is the beginning of the property works. 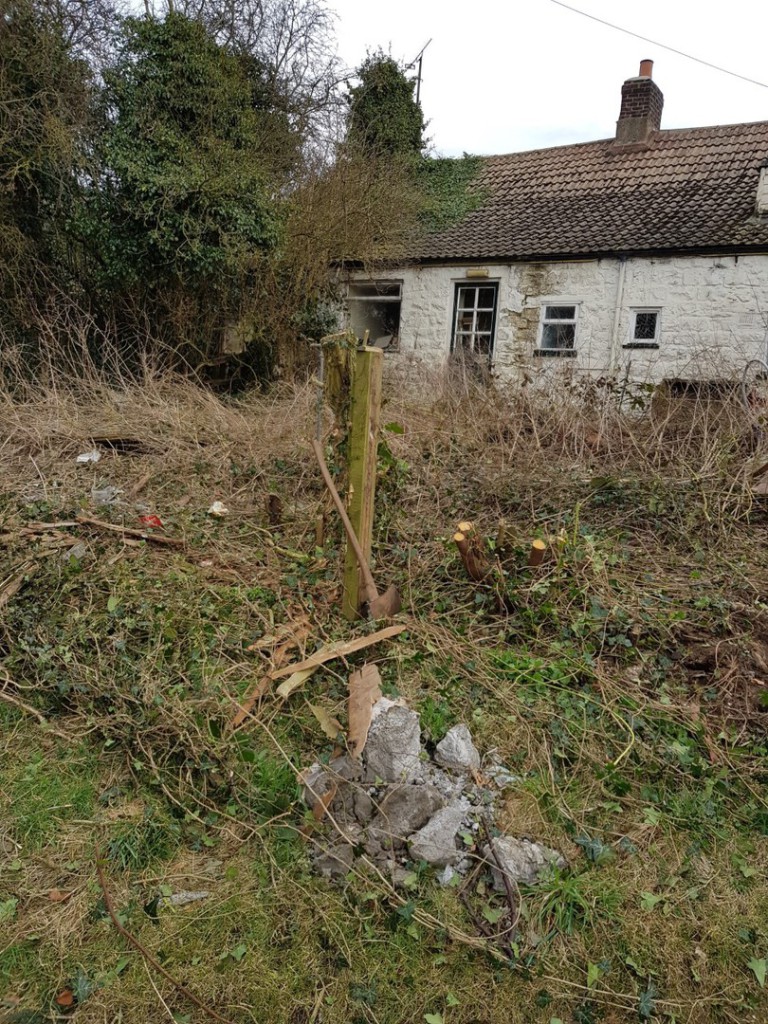 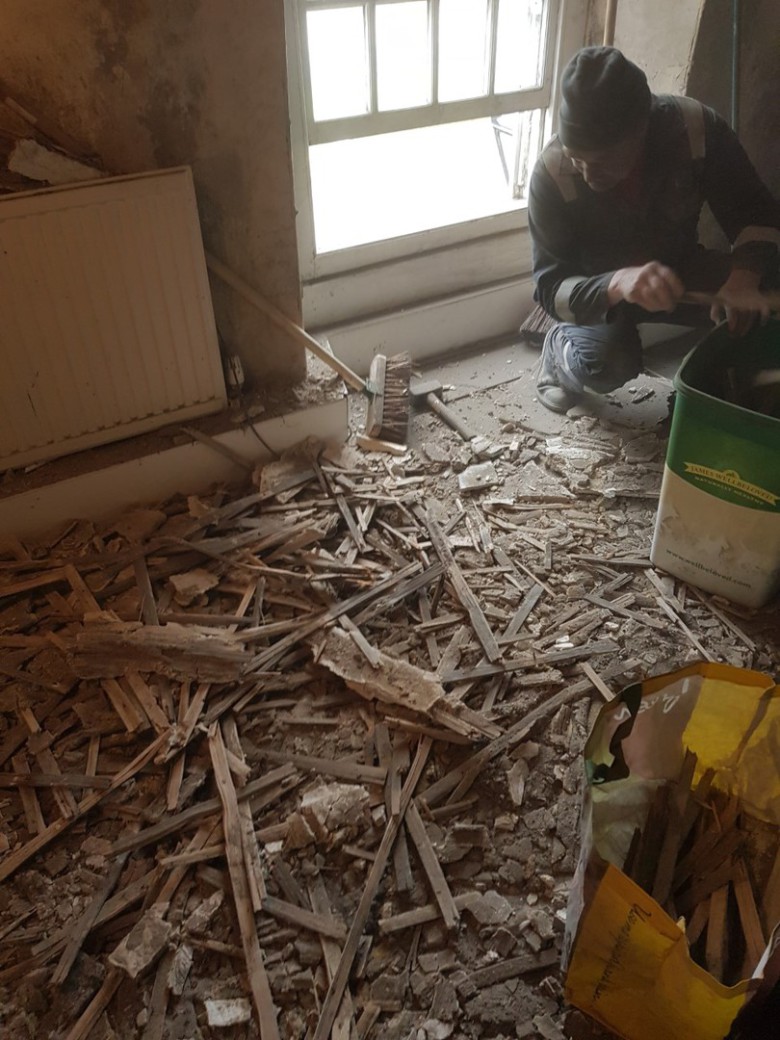 Our great friend Andy Welbourne looking on after the ceiling collapse. He's sure whether or not to help sort it - or torch it!!!! 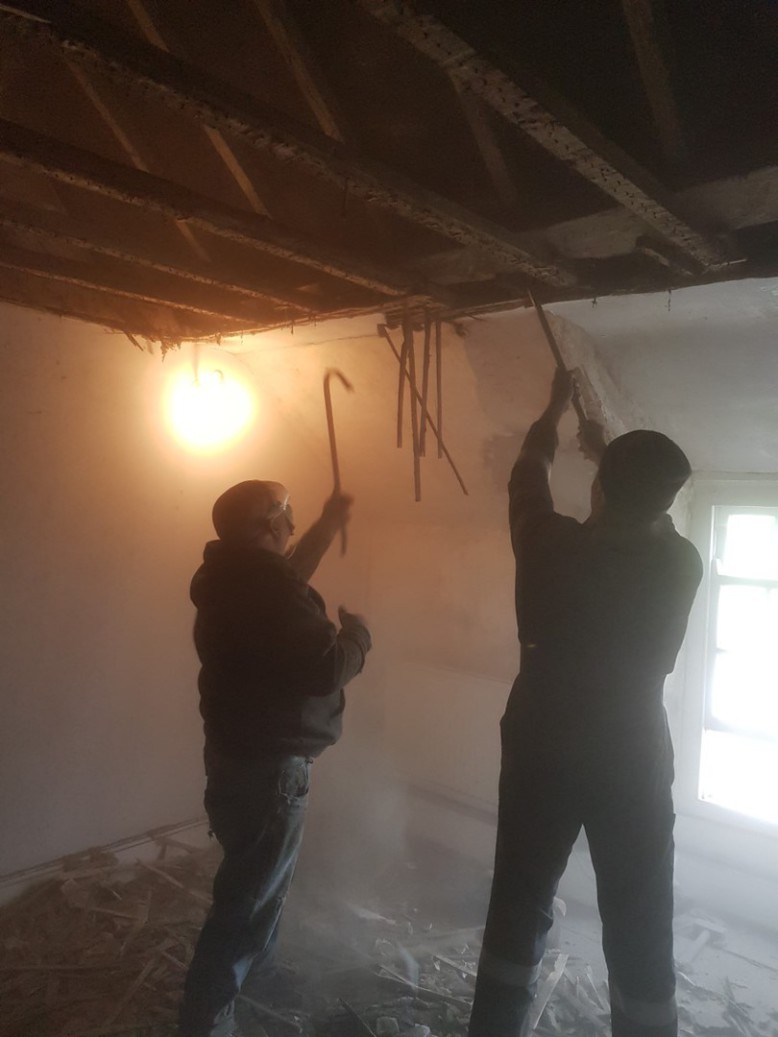 Another great friend alongside Andy is Mick Holmes, these two as well as others where an amazing help during these tough times - and there help will never be forgotten!! 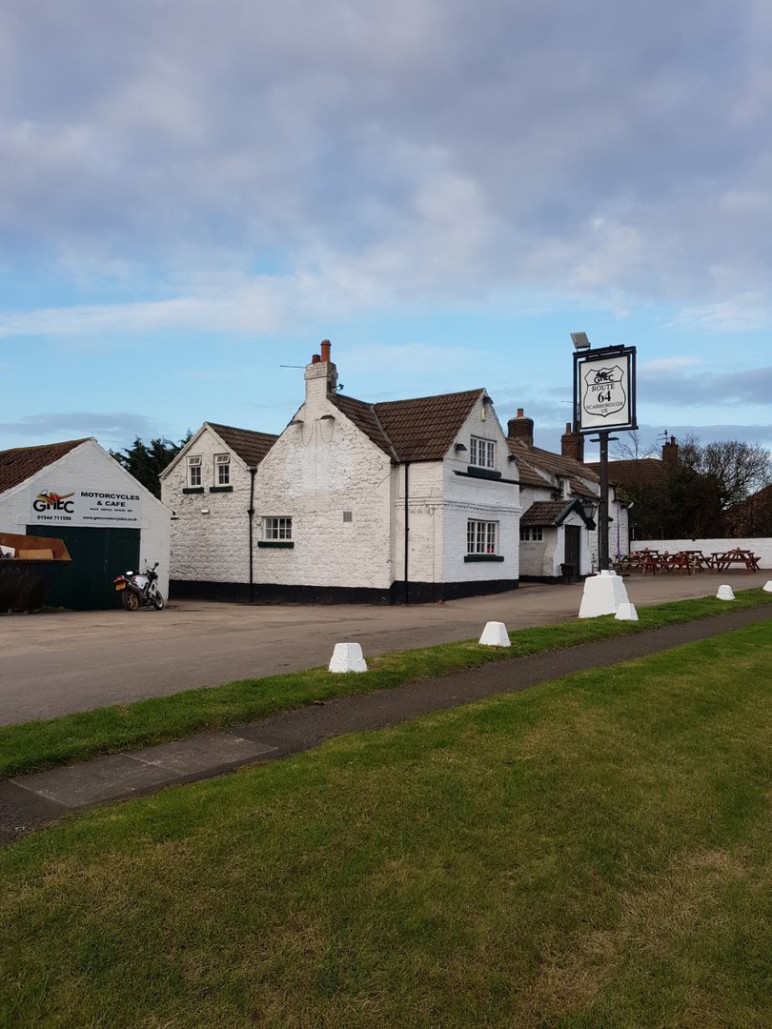 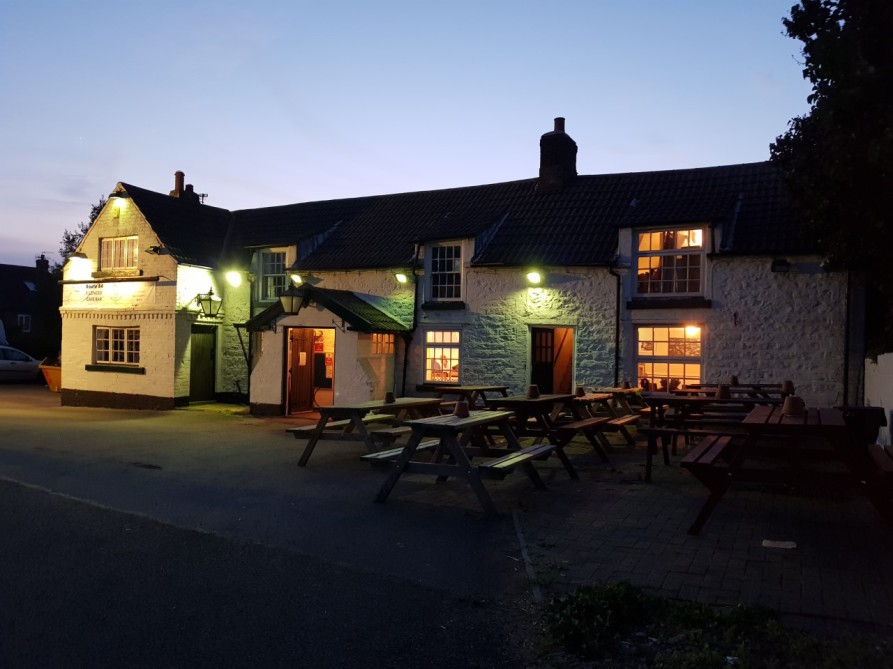 After many sleepless nights and hard long days - the building finally becomes useable. Note the skip at the end. You can always tell when things start to improve - because the skips get smaller!! 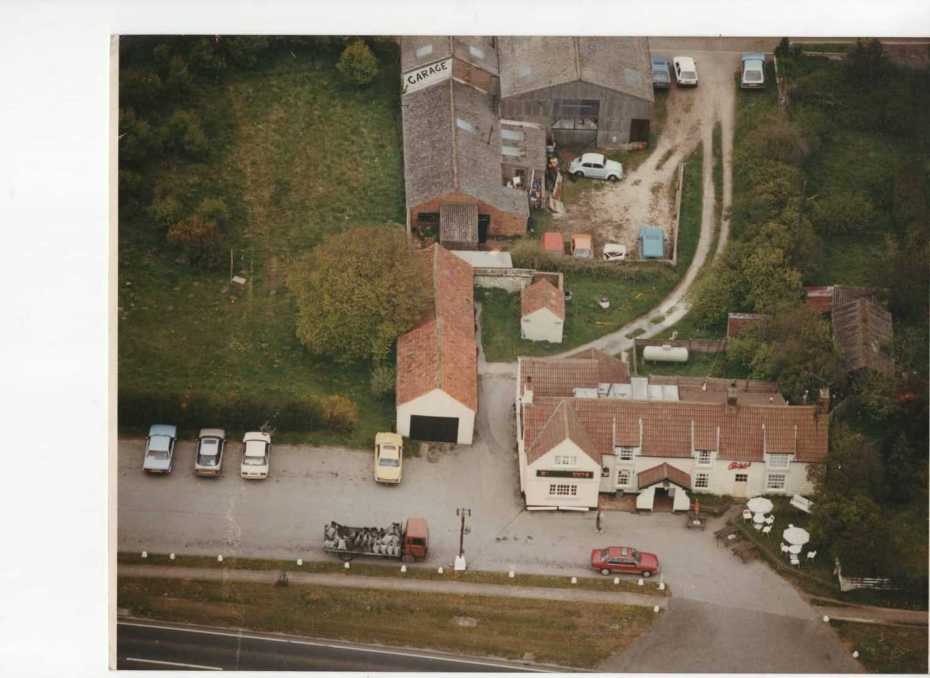 A pic from the eighties - how things changed!! You can still see, the old toilet block on the grass to the rear which has since been demolished!